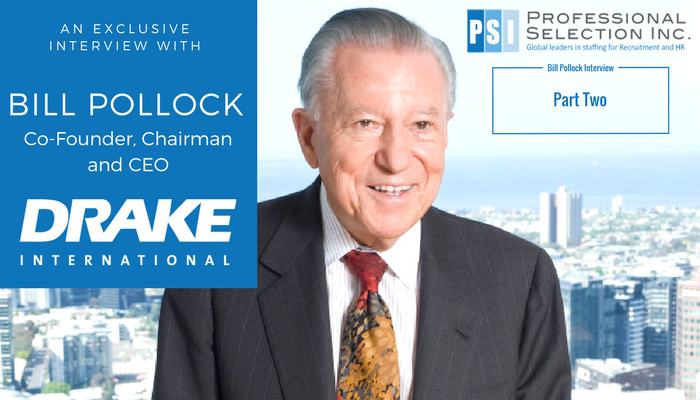 We’re back to our interview with Bill Pollock, Co-Founder, Chairman and CEO of Drake International. When we left off, Bill was explaining the driver behind his international expansion

Suky: Wow, that must have been frustrating. While we’re on the topic of legal changes, I’d be interested to hear your opinion on the recent minimum wage increase. I’ve been talking to some of my smaller clients and actually a couple of them are thinking about shutting their temporary divisions down. They just don’t think they’ll be able to sustain it.

I just interviewed a candidate the other day who was saying that she’s now talking to her existing temporary blue-collar clients about transitioning candidates via temp-to-perm. So the client would take the person onto their payroll and reduce their agency overhead. And some clients have already said, “No, I’m not doing this — I can’t afford to take on permanent staff.”

So from my perspective the minimum wage increase is causing uncertainty — and maybe some anxiety — in the temporary staffing space right now. Do you see it having the impact that people are afraid it will?

Bill: I don’t, because I think that the minimum wage is going up for permanent employees as well. So, all around, it’s just the market conditions. There’s still the need for temporary people to avoid paying a full-time salary for a part-time job.

And it might even be such that pressure on costs of companies has gone up so much that they’d be a lot more careful about not hiring too many permanent people — and cutting back and using more temporary people.

Suky: Yeah, that makes sense as well. It will be interesting to see how this plays out: will clients be willing to pay more to maintain the agency’s spread so they can avoid growing that permanent payroll?

I had a question for you a little earlier about unions. I grew up in England, so I remember the unions had so much power with things like the Miners’ Strike in the 80s. By the time I moved from England around 11 years ago, they’d lost a lot of that power. It was really interesting to see how powerful some of the unions still are in Canada. Do you see that kind of decline here?

Bill: Well, I don’t see a big shift here in Canada. I think that unions have not been as powerful here as they are in Australia, for example. In Australia, it can become — they really control the economy, almost.

Suky: That reminds me of how different things are from country to country in terms of the labour market. I’ve recruited in South Africa — only Johannesburg and Cape Town so I can’t speak for the rest of the country — where the recruitment process is just totally different to Canada or the UK.

In South Africa, applications and resumes show information that we simply aren’t legally allowed to use or ask for here in Canada. I’ve gotten CVs with exact places of birth and information about heritage, and even people’s health status. How on earth do you stay on top of it all?

Bill: Well, that’s always a challenge. Right now, South Africa is in a recession.  Fortunately, we are booming — we’re up 45% over last year. It’s a case of having a team that can adapt and make changes as time goes on. You have to have a team in place that can keep up with legal changes and things of that kind.

Suky: If I look at Drake International, it is definitely an entrepreneurial success story. Many of the people who I’ve met throughout my time here in Canada have had this mindset of “we can do this, nothing is too big, we’ve just got to figure out how to do it.”

Bill: So I just read something the other day, Suky, I think it was compared to something like 60 years ago: of the top largest companies in the United States, there’s only 30 of them left.

And you know, that’s from 60 years ago. Drake has been going 66 years. And the interesting thing is that — you mentioned Canada’s 150th birthday — our 66 years means we’ve been here for 43% of the existence of Canada. And where in the world can you find a Chairman today who’s been in the same job for 66 years?

A chairman of two employees to begin with!

Suky: We all have to start somewhere. I started in my basement!

But you’re absolutely right. I honestly cannot think of another company where you’ve had the leadership and direction that Drake International has had for 66 years. And you definitely see it in the businesses. You see the sense of pride. When I talk to your leadership team there’s this sense of ownership. I’m a firm believer that this kind of stuff — inspiration, leadership, direction — comes from the top down.

Bill: The interesting thing too is that, in early days, we were very much a leader in terms of utilizing women in the workforce. And, sure, we had to find temporary women to work part time to do the calculating and typing work on our premises, and go out as temporaries as well.

But, as time went on, it was amazing how many female managers rose up through the company and did so well. I remember one time when I hired a particular woman in Toronto to be what we call a client service representative – which is a sales person. And so she would go out to call on our clients and she would tell me that she would go in and literally, as a woman arriving to talk to a manager at the company, all the heads in the company would turn and look at her as if to say: “who is this woman coming in here?”

And we had a team of those people and they were so service oriented and did so terribly well that even today, some of our top managers in the world are women.

Suky: That’s excellent to hear. I think taking the lead on those kinds of things is what sets businesses apart from the crowd. My final question for you has to do with leading from the front, and not being an “armchair general” so to speak. How important is this for you? How much of your success do you attribute to this leadership style?

Bill: I do still to this day go see clients from time to time. The fact of the matter is that I wish I could get out more. I want to get the feel of the market more. I just wish I had more time to get out there.

Suky: Your time is limited, I totally respect that. I can tell you that there are a lot of companies where middle management doesn’t even do that, let alone the Chairman, because they don’t think it’s their job anymore.

Bill: Well, as I said, I think that being out there and having a feel of the market and the business is so important. I still make it out to Canada 3 times a year, and I try to get down to our offices in the United States and Australia a couple of times a year — it’s the only way to keep on top of things. And I’ve been known to drop in on our other operations too: I’ll occasionally make the trip to South Africa, Singapore, New Zealand — wherever I feel we need a catch-up or things of that kind.

So, that’s always been a part of my style — taking those leadership meetings and catching up with the management team. And it’s so terribly important to know your team on the ground, whether it’s the frontline sales team or country management. It’s the only way to keep your finger on the pulse and to be able to recognize or reward success.

Suky: I agree. I’ve worked with plenty of candidates in the past who have come to me and said, “I’m working for a large organization. Nobody outside my branch is interested in what we’re doing,” or they feel like “I don’t know what’s going on elsewhere in the business — it doesn’t feel like we’re all pulling for the same team.” So that disconnection from senior management makes people feel like there’s not a long-term future there.

Bill: Well, something that we’ve been doing at Drake for a very long time is what we call the “One Hundred Percent Club”. We’ll get together our top performers from all levels of the business for a week every year. We’ve had them in Moscow, Budapest, Las Vegas, Barcelona — across the world. It really is a fantastic opportunity to focus on members of our team that are outperforming.

So, it’s quite entrepreneurial — we invite guest speakers and we encourage that innovative spirit and free thinking, and it all contributes to the success of the team. I get the opportunity to spend some one-on-one time and get a feel for what’s going on and our team can learn some really valuable things from one-another.

Suky: That sort of culture is so important to keeping a business healthy. And it’s so important for staff to have that opportunity for professional development. That’s another thing I hear about from my candidates and something they really like about the agencies we work with.

People really appreciate working for a business that will make that investment in them. Whether it’s helping pay for certifications, being flexible if they want to take courses, or sending them to conferences, it all really contributes to that team spirit of “Let’s be the best at what we do.” Everyone wants to be a part of that kind of team.

Bill: Well, I would certainly agree with you there. Personally, I still make sure to get out to the HR Technology Conference every year, down in Chicago or Las Vegas. It’s so important to stay on top of your professional development. As I said, I’m always travelling for the business — except for maybe a 1 or 2 week working holiday each year — but I’ll always make sure that I’m attending the conference. It’s the only way to keep up with the industry, with the new technologies and things of that kind.

I couldn’t stay on top of the businesses or meet clients if I didn’t know what was going on in the industry as a whole.

Suky: I hope I’m still as active and involved when I get to your age! I try to get out to the conferences too but I tend to get caught up in the networking so I don’t get as much time as I’d like to learn. I must admit I’m surprised that you’re able to stay so active and find the time for all of this.

Bill: I love what I do. I read a book a number of years ago — I got it as a birthday gift — called “How to Grow Old Disgracefully.” There’s a chapter called “Work Yourself to Death” and it’s all about working hard to live longer — it says that people who retire young die young. So I’m still an entrepreneur at heart, I work 7 days a week and travel 7 or 8 months a year.

Fortunately, over the last 48 years I’ve only lost three days off work and one of them was a Sunday!

Suky: It’s working. Bill, it’s been a real pleasure speaking with you and listening to your thoughts about the industry and your own story of how you got started in this business.

Congratulations on celebrating 66 years in the business this year, and thanks again for taking the time.