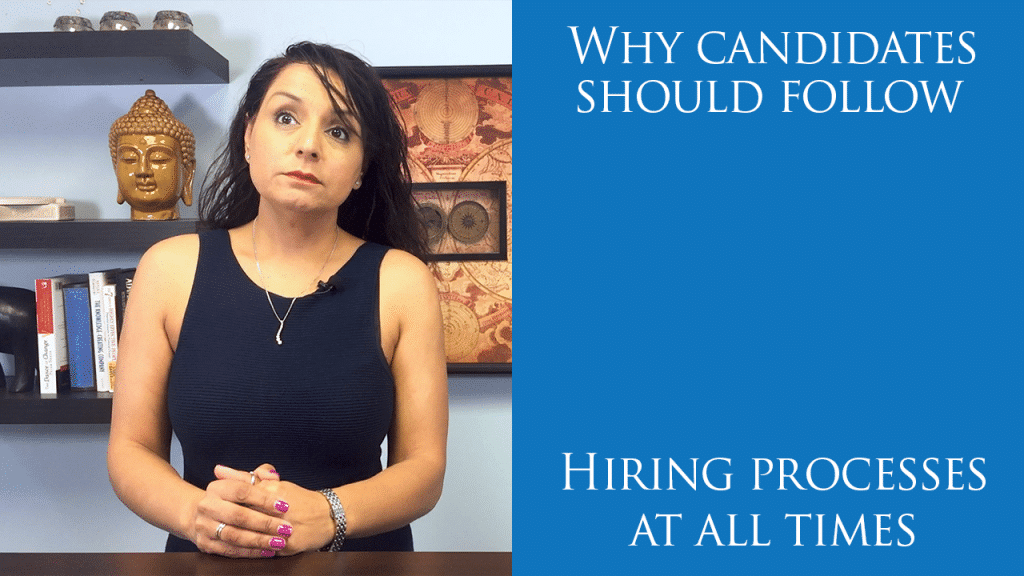 Suky talks about an experience she had with a job applicant on LinkedIn, and speaks about how important it is to follow the hiring process that is set out by either the recruiter or their client.

Hi I’m Suky from Professional Selection. Today I’d like to talk about a LinkedIn post that I made last week and the response I got to it. Just to give you a bit of background, I’d actually advertised for a team leader position with one of my clients and I’d asked candidates to send me an email with their CV. I actually had a great response, all but one candidate done exactly that, they’d sent me their details via email with a cover letter and what-have-you. But this one particular individual sent me a two liner with their name and saying they are applying for this role and we need to talk.

My response to that was: “okay, let me as I know nothing about this individual, let me look them up on LinkedIn.” Looked them up on LinkedIn, very generic name, five or six different profiles came up. None of them were relevant to the staffing industry. So I don’t know which person this was. So, I emailed back and asked this particular candidate for a CV. They refused to give me their CV, they insisted on talking and meeting face to face. Now why would I do that? First of all, why would I go meet a random stranger that I all I have is a generic name for, don’t even have a mobile number for. I just wouldn’t do that – I don’t think any of us would. No hiring manager is going to do that, but I put it on LinkedIn to see what my network thought I should do, and I got a really interesting response. To be honest I was really interested to hear how other candidates would feel if they’d applied for this job and this individual was able to bypass the process and so forth.

I was expecting candidates to say: “No, you should continue seeing him, so what he’s differentiating himself”. But actually the response was really interesting. A lot of candidates felt that this particular individual should follow process and it wasn’t fair on them who had followed the process. From my recruiting friends I got a pretty much a mixed bag response. Some were saying: “okay this individual is differentiating themselves so that’s great, they’re standing out from the crowd so to speak”. Other individuals were like “absolutely not, you’ve got somebody here that does not follow process”. Despite me asking them to follow process a couple of times.

This individual then instead of sending me their CV or giving me any information – I can’t even tell you whether this individual has the right experience or not – started calling the office, and was extremely rude to our receptionist. Now, let’s be clear when I say extremely rude, he didn’t say anything offensive but it was the tone, it was the dismissiveness, and it was a belittling of the role of the receptionist. That was what killed this particular candidates application in the process as far as I’m concerned. Yes, you’re trying to differentiate yourself but come on. If that’s how you’re conducting yourself in an interview process you can imagine what they’re gonna be like with the hiring company.

So at the end of the day, what am I saying to candidates who want to differentiate themselves? I’m saying it is still important that you follow the process. If a hiring company has asked you to submit a CV, as much as you may not want to do that, you have to submit that CV. Now there’s nothing wrong with putting a quick cover email or following up with a call. At least the hiring manager has a frame of reference when they’re speaking with you. If the company is asking you to fill out an online application, again, that is their process you have to respect that whether you agree with it or not, that is what you need to do. But again you can differentiate yourself – because you can do a follow-up email, you could do a follow-up call, but certainly do not demand that the recruiter whether its internal or external takes time out of their day to meet with you when you’re not even prepared to disclose whether you work within the industry, whether you have the experience. A two liner is no good because at the end of the day if that’s how you’re communicating nobody wants to hire you, because once you’ve got the job if that’s your style of communication that’s going to be problems. I’ve never yet had a company, a client say to me: “can you find me somebody that’s rude, and only does two liner communications, and doesn’t follow process?”

Anyhow, I’m sure there’s many other opinions and views, would love to hear your comments. Thanks for listening.

Talent Titans #32 – Do Recruiters Need to Meet Every Candidate?
Scroll to top