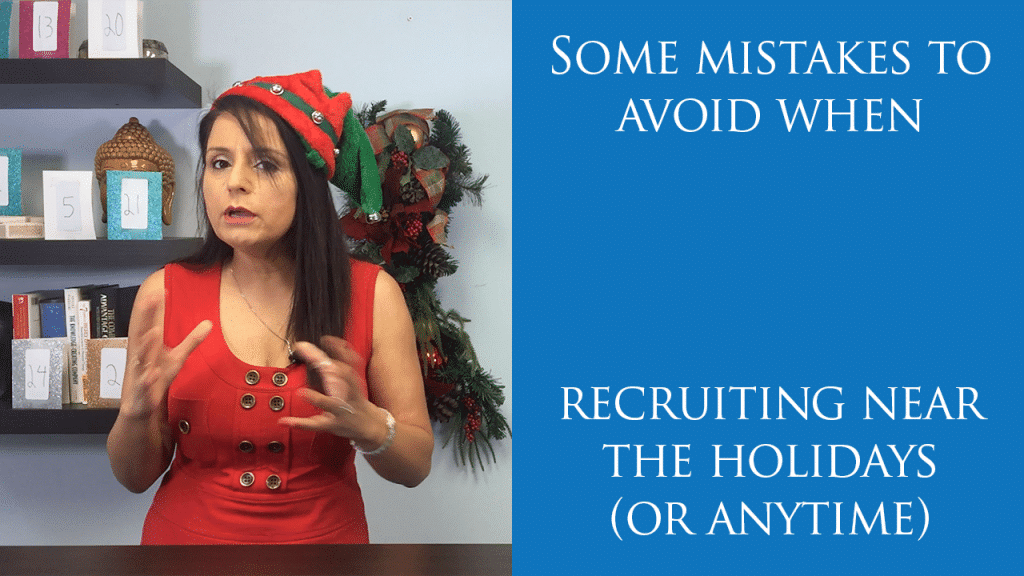 Suky is in the festive spirit this week as she talks about a few recruiting mistakes she sees sometimes around the holidays, and how to avoid them. To be clear though – avoid these at all times!

Hey everyone I’m Suky from Professional Selection and as you can see it’s that time of year again. Christmas is around the corner, everybody from a sales perspective is looking at how they can engage with their existing and future clients via email and so forth so automating it all. Which got me thinking a couple of things, a couple of mistakes I think people are making.

I have no issues whatsoever people sending me automated emails – but get them right. So don’t send a Happy Christmas email to a potential new customer or even an existing customer saying: “Dear insert name here”. That’s not nice. I mean everybody knows automated in software is used but come on, that’s really, really sloppy. So don’t make that mistake. It got me thinking about other stuff people do especially around this time of year to build their potential client base for next year and just touch base. Some of the mistakes that I feel or I see people making, as I said there is the insert name here, don’t do that, but you’re also looking at: have you sent it to somebody that’s relevant?

Now I’m going to bring this back into recruitment because that’s my area of expertise. If you’re sending out be it a client email, be it a candidate email about a job, or about a candidate, make sure you’re selecting your audience correctly. By that what I mean is if you’re going to send an email to potential candidates about a job, at least make sure they’ve got the basic skill set to do that job and they’re within the right location. So for example don’t send somebody in Vancouver a job for Toronto unless you know that person is looking to move to Toronto!

In which case, of course include them but there’s – you know it’s just annoying, and also the experience level. Really? Don’t insult somebody by sending a senior person an entry-level position. That’s just again really sloppy, and it’s annoying, and you’re probably doing yourself more harm than good.

Now some of the other things I’ve been hearing and seeing is you’ve got all your marketing. As I said again whether it’s candidate or client. And then you get a response and the lack of time on your response. Now totally understand, you’re going to get quite a bit of response and trying to stay on top of that is going to take a bit of time, but as I said earlier if you selected your target audience properly the response should really be relevant individuals. Now of course again, if it’s a candidate one somebody may have passed it on to somebody else and they’ll apply for the position and they really don’t have the skillset to do that. In which case a quick email will suffice to say “sorry you don’t have the skill set.” But if people have responded to you – take the time to send them at minimum a personalized email. Don’t use automation here. What would be even better is if you picked up the phone, but again I understand that that might not always be the case, but whatever you do make sure that next activity is personalized.

Also, you’ve got clients and candidates and everybody’s contacting you at this time of the year, looking for new jobs and just looking to talk, and you’re picking up information just through conversation. Don’t repeat it, especially if it’s something confidential. Again whether it’s a candidate or a client, somebody has told you that. They may not necessarily have said “I’m telling you this in confidence”, the assumption might be there. It’s just that time of year where candidates may want to ring you up and just let out their frustration about their current employer, talk through something. They don’t want it repeated. As with candidates – if you’ve had a conversation with a recruiter and you’re sharing your frustration with them and the recruiter empathizes with you, I’m not saying they’re saying you’re correct but they empathize and they’re not taking sides.

For lack of a better word. don’t go around repeating that because that recruiter, you’ve kind of caught him in the middle there. You’ve put them in difficult spots. So as I said those conversations that are happening now keep them between yourselves, and if you are going to share something if you’re the recruiter, get permission from the candidate. From the candidate point of view, if you’re going to share something that was disclosed just ask permission. If it’s shareable, no one’s gonna say no.

Anyhow, that’s just a couple of things that I’m thinking of this time of year. As always, I’m sure there’s many different opinions, would love to hear them. Thanks for listening.

Talent Titans #30 – Career Introspection During the Holidays
Scroll to top