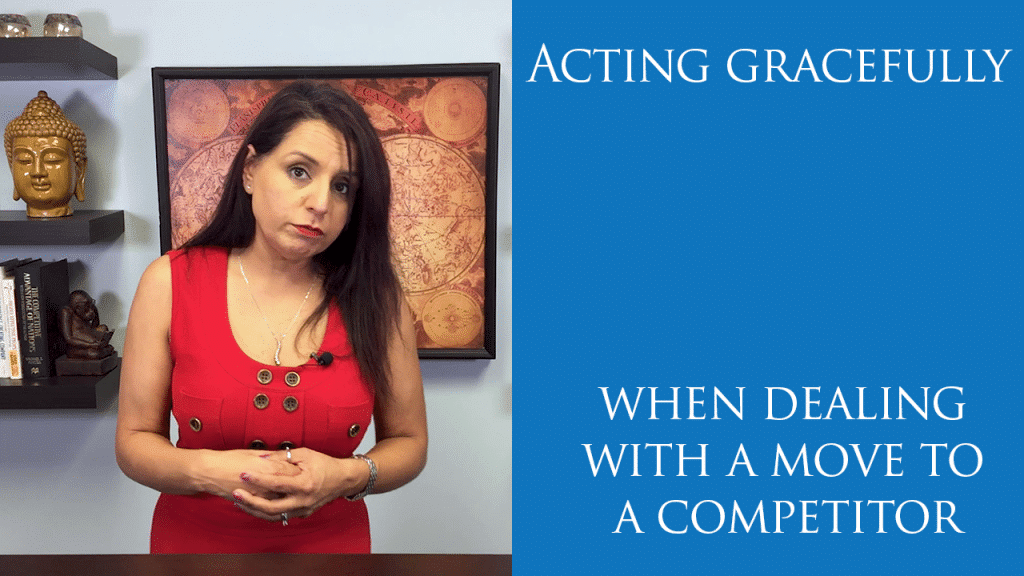 Suky talks about a story where a company conducted itself poorly when facing a situation where an employee moved to a competitor, and how to avoid those pitfalls as a business and as an employee.

Hi I’m Suky from Professional Selection. Today I’d like to talk about what you should do as a candidate when you’re resigning from your current employer, and as an employer what should you do around protecting your your business. Recently I actually spoke with a candidate who had a terrible experience with his previous manager and company. Actually when he resigned this individual had followed all his obligations under his contract, he had given notice, told his company he was going to a competitor etc. Offered to work his full notice period out but quite frankly how his employer had conducted themselves, handled themselves, was disgraceful, really disgraceful to say the least. They had an employee here who had worked for them, I believe off the top of my head about a year, who was now moving on for career progression and all that good stuff that they were unable to offer and this individual is trying to part on good terms.

Why would you do that?

That employee – do you really think that employee, first of all, is going to do anything to sabotage your business? Now just so we’re clear, if they do your perfectly within your rights to follow the letter of the law etc. Listen: if an individual has has decided to move on and being very, very amicable, open and honest about it and they go to a competitor yet they do absolutely nothing that jeopardizes your business, why on earth would you want to treat them like that? That individual is going to be talking to other people in the same city, town, wherever you might be and they’re going to talk about the experience they had with yourself. Do you really think a future employee reading that, hearing that, is going to want to come and join your company? Absolutely not.

But by the same token, as a candidate. If you’ve left a company and you then go on to continuously badmouth them without having a valid reason, justification, etcetera. I mean bad-mouthing is always in my opinion not a good idea but if you’ve had a bad experience be very careful how you relay that experience, because everything’s down to interpretation at the end of the day. Any future hiring manager that hears about that – they don’t want to hire somebody that just doesn’t take ownership of why things didn’t work out at that previous company.

So ultimately, at the end of the day, people do move on. That is just life. That is called career progression and that is called just career growth and so forth. So as an employer, give them your blessing. If you have feel you have to remind them of their non-competes etc, absolutely. But ensure that they exit the company feeling good about yourselves and they would certainly not hesitate to recommend you to anybody else as an employee.

If you’re leaving a company and you’re going to a competitor, make sure you don’t breach your non-compete. If you don’t understand what your non-compete is, seek a lawyer, seek some legal advice. Do not do anything to jeopardize that because ultimately nobody wants to hire somebody that’s dishonest. As I said don’t badmouth your previous employer because every industry is a small industry.

Anyhow, I’m sure there’s many different opinions and thoughts on this, would love to hear them. Feel free to leave a comment below and hopefully we’ll talk soon. Thanks for listening.

Talent Titans #26 – The Value of a Good Recruiter