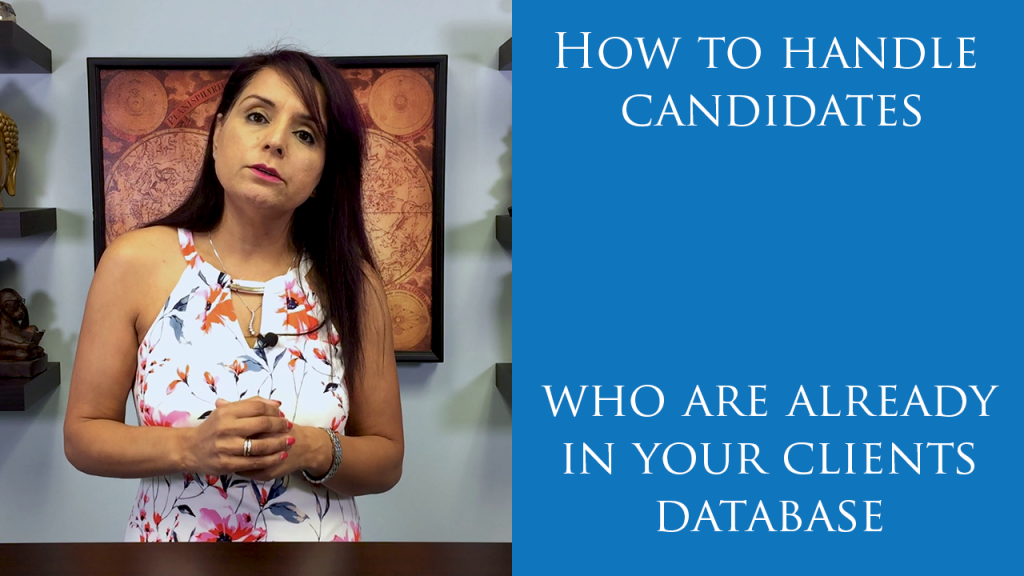 Suky talks on the subject of submitting candidates who are already in your client’s database, and how to avoid this problem altogether at the outset.

Hi I’m Suky from Professional Selection. Today I’d like to talk about what you as a recruiter can do if you’ve interviewed a fantastic candidate for one of your clients, and you go to present them and client says: “Thank you very much, he’s already in our database you’re not allowed to represent him.” And then they subsequently pick up the phone and they call the candidate in for an interview.

Well simply put that’s wrong. You’ve done all the work in attracting that candidate, not to mention all the cost involved with that. Most recruiters, in fact 99% of recruiters will say to a candidate “This is a company we’re presenting you to, have you applied to them previously?” Most people are honest they’ll say yea or nay. Now they may have applied without realizing that they applied to that company, or it may have been two three years ago. You certainly can’t expect him to remember. They may have applied through an online portal that didn’t give the company name. It could have been one of these job boards. There’s just a number of different reasons why that might happen. So what can you do?

Well I’m going to back up a second and say when you engaged with that client and when you were signing terms this is a question you need to ask and you need to understand the boundaries. What is that timeframe going to be and it’s got to be part of your terms and conditions on paper. So I would say 6 to 12 months. Personally speaking longer than 12 months, no. People’s careers move on, people’s skill sets develop, a number of different things could happen.

If you are going to consider longer than a 12-month period here I would suggest you negotiate and look at the overall deal. There may be other areas in which case you’re you’re happy to to give 18 months, whatever the case may be. So if you do that, this problem won’t arise.

Now, you’re a hiring manager. Your agency recruiter has presented a candidate to you that’s in your database from two years ago or 18 months ago.
I understand you spent all this money on employer branding, marketing, attracting candidates, and they’re in your database now. But you know what?

You’ve done nothing with them.

What is your candidate engagement strategy? What have you done to stay in touch with that candidate over the course of, as I said, from the day they’ve applied? Are you constantly engaged with them? Have you got, is there a monthly touch, quarterly what is it? Because if you’ve got that touch then the candidate is still aware of you. So the candidate would have told the agency: “Actually yeah I’m still talking to them.”

So at the end of day you could say “no I’m not paying for that candidate, I’m not going to allow that agency to represent that candidate”, you could pick up the phone and call the candidate and get them in for an interview. But what message have you sent that candidate when you’ve kicked out the agency, the recruiter that originally engaged them?

Yes there are some people out there that are just going to worry about getting the job and then they don’t care that the agency recruiter has been mistreated here. But most people will look at it and say “hmm that’s an integrity thing, why is that recruiter that I’ve built a relationship no longer allowed to represent me?”

Anyhow, I’m sure there’s many different opinions here but if there’s one thing I’m saying, advising all agency recruiters to do is when you are signing those initial terms and conditions, get this in writing. Agree a timeframe. If you take that one step it avoids all these problems. If you’re an internal recruiter and you spent all this money on employee engagement, branding, then put a strategy together to stay in touch with those candidates. So you’re able to then, when the relevant role comes up, you’ll still be first to mind and they’re first in mind for you.

As always would love to hear your opinions, and thanks for listening.

Talent Titans #23 – The Basics of LinkedIn
Scroll to top