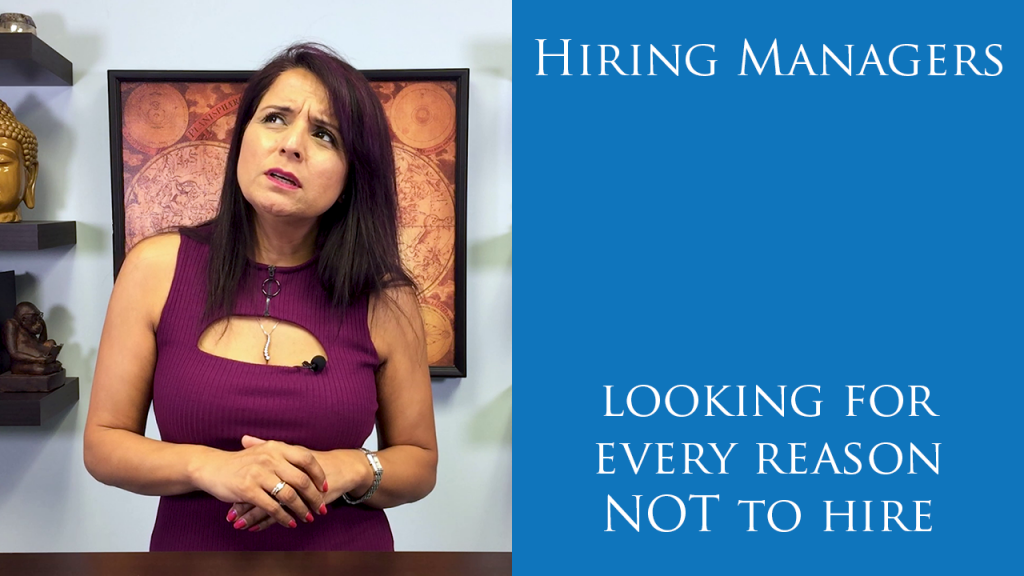 Suky has a bit of a rant over Hiring Managers who look for every reason not to hire a candidate instead of reasons TO hire them. She also goes into some possible explanations for this behaviour…

Hi I’m Suky from Professional Selection. Today I’d like to talk to all you hiring managers out there that interview a great candidate and then have a “but”. Now just for clarification I’m talking about: you’ve spoken to your (whether it’s an internal or external recruiter) who’s done an in-depth interview, great, love the sound of that candidate, yep he or she can do this job. You then meet them and you’re “yeah you know what this candidate is good, let’s get them back in for another interview”. But after that interview you suddenly have some comments such as “great candidate but…” Now what is that “but”? let’s look at some of those “buts.”

Typically, especially if it’s a management role so let’s use management as an example. “Great candidate but I’m not sure he wants to manage.”

“Great candidate but I’m not sure he’s going to get on with my team.”

“Great candidate but I’m not sure he’s managing enough people.”

Well come on, think about it, should you really not have uncovered that in the first or the second interview?

Now there are going to be those candidates that are fantastic at hiding the truth, being creative with the truth I’ll grant you that. It takes a process to uncover who those are, but they’re far and few. I’m talking about those managers that see a candidate that’s been transparent, genuine and you’re constantly looking for a “but”. Now, I would question that “but”.

So I say to a lot of those hiring managers, look internally. Why are you constantly finding a but with an individual? Is it because that candidate highlights an internal weakness in yourself? Is it that you’re fearing that candidate coming on board because you fear they are better than you, and they may outshine you in the business? Are you fearful they may succeed where you may not have been so successful?

There’s a billion reasons, but ultimately it boils down to your own insecurities and comfort level. Now, no issues whatsoever with a hiring manager interviewing a candidate then having a but. For example I only managed a team of five and this is managing a team of eight. Well, a great hiring manager should be looking at that as a brilliant coaching opportunity, as a mentoring opportunity, as helping that individual grow. I’m not saying you’re going to teach them how to manage, because they already know how to manage five people. What it is showing them is how to manage their time better in order to be able to manage a bigger team.

The other thing I would say is what if that individual actually genuinely is better than you?

Now nobody really wants to say “oh I’m hiring somebody that’s better than me, oh my god they might replace me down the road”, a billion different things will run through your head. But how about changing the story you’re telling yourself and looking at that individual and saying “You know what, what value this individual can add to my business, how they can help develop that business, how they may be able to take the business down another avenue?”

Ultimately you’re the person that’s hired them. You’re the individual that’s going to be seen as having recognized this great talent and brought them into the business. So here’s what I’m going to say to all hiring managers out there. At the end of the day we’re human beings. When we’re hiring individuals for roles that are going to be reporting in to us, yes we want to be the stronger person, we want to be the most experienced person, we want to be the best person in that. But maybe next time you’re rejecting somebody because you feel they’re better than you, as I said change the story. Look at it and say “you know what, what can this individual add to my team? what value can they bring to this business?” Because I guarantee you if you look at what’s right for the business first, naturally you’re going to be looked after yourself.

As I said at the end of the day when the board is looking at it that individual is your hire, you’re going to get the credit. As always, I’m sure there’s plenty of hiring managers that completely disagree with this! Feel free to leave a comment below, and let’s chat.

Anyhow, thanks for listening.

Talent Titans #21: How to Deal With A Difficult Hiring Manager (Follow Up)
Scroll to top