The Global Recruitment Crisis: Why Candidate Shortages are Likely to Continue

Why are candidates in short supply? And what can companies do to alleviate the impact of these shortages on their business? I recently conducted a poll with recruiters in my LinkedIn network to find out… 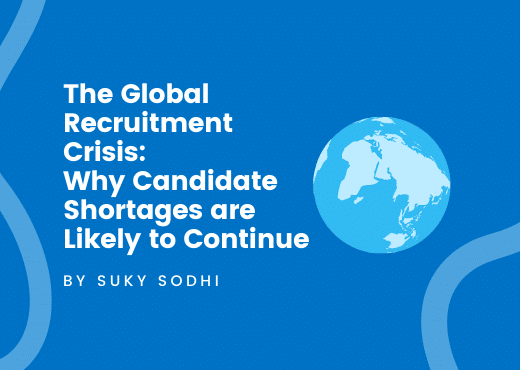 The recruitment market is facing a global candidate shortage, with recruiters expecting the problem to continue for years to come. This is backed up by recent research I undertook with my LinkedIn network which showed 71% of recruiters expect candidate shortages to be a problem for at least another year, while 37% expect that will last for 2 years or more. So why are candidates in short supply? And what can businesses do to mitigate the impact?

Let’s firstly look at why candidates are in short supply – and why that’s likely to continue to be the case for some time to come. Then we’ll take a look at some actions that businesses could potentially take to address the issue – and how likely recruiters think it is that each of these actions will be taken.

So first off, let’s talk about candidate shortages, which are being driven by a number of factors:

During the Covid19 pandemic, we’ve seen a surge in people wanting to work from home. Now that the pandemic is moderating in severity and companies are asking staff to return to the office once again, we’re seeing a sharp increase in resignations.

Why is that? Well from our vantage point, the pandemic has made people reassess their work-life balance and what they want from their careers. For many, the traditional nine-to-five office-based career no longer cuts it. Many people want more flexible working arrangements, greater control over their time, and a bigger say in where they are required to do their work.

Businesses have been slow to respond to these changing dynamics in the employment market – as the insistence on returning to offices has shown – and as a result, many are losing good staff who don’t want to go back to the way things were.

Even before the pandemic hit, businesses were struggling to find candidates with the right skills. But economies have undergone major shifts in the last couple of years, which means the skills needed to fill vacancies have also evolved – and the skills gap has widened.

For example, the pandemic has accelerated the move to digital and online businesses models – especially those that see businesses now delivering to the home things that previously would have been bought in person. The jobs being created consequently require different skillsets to the skills that many of those being made redundant actually possess. Hence the skills crunch.

That’s a problem on the supply side of available candidates to fill the roles being created. But there’s a demand problem too – ie. people no longer want to take up certain types of jobs. Why is that? Well across the economy as a whole, far more companies are now willing to hire remote staff than ever before. This has made a lot of careers far more appealing to job seekers who might previously have been put off by the inflexibility of office-based work or the geographical location of that work.

To put this in the crudest of terms, people no longer have to be based in Silicon Valley to enjoy a good Silicon Valley tech career – they can live and work pretty much anywhere. Now transpose that to every industry and job where remote working is now a realistic possibility. This is a huge change we’re seeing in the jobs market!

The impact is actually twofold. Firstly, this is having a big impact on where people want to live and work – and therefore which jobs they will consider. But it’s also making it harder for businesses to find staff, as they’re now competing with other businesses from all over the world for the same talent.

Another thing the last years have brought about is a major change in attitude towards changing careers.

It’s now far more socially acceptable – in part due to the media coverage surrounding this – to completely change career direction, or even decide that your career needs to be put on hold for a while. So people who might not have decided to completely change career in 2019 are now much more likely to do so – and to feel supported rather than ostracised when they do so.

This, of course, is simply adding to the pool of people who are exiting the sectors they previously worked in and consequently making it harder for businesses to find and retain staff.

The above are just some of the reasons that candidate shortages are being felt and are expected to continue for years to come. None of them looks like a factor that is about to go into reverse – and so it’s perfectly rational that recruiters expect candidate shortages to persist.

What Actions Can Businesses Take To Address Longer-Term Candidate Shortages?

There are a number of steps companies could take to try and see out this period of heightened candidate shortages:

The first four of these I put to my network in a poll, to again see which recruiters thought was most likely to be adopted as a solution. Let’s look at each of them in turn…

Expanding the geographic candidate pool (46% of respondents): this is the compromise / action step that recruiters think it is most likely employers will resort to in order to overcome ongoing candidate shortages.

With more people now open to working remotely, businesses have the opportunity to recruit from a far wider geographical area than they previously could. Simultaneously, line managers within businesses have had their eyes opened to the fact that remote workers can be far more productive than previously feared.

The combination of these two things means that businesses are now less tied to recruiting from a small geographic area and can instead consider job seekers from anywhere in the world. Expect recruiters to start considering candidates from further afield as talent shortages persist.

Being less demanding about “must haves” (26% of respondents): Insisting on an extensive and inflexible list of skills and experience has always meant that businesses have missed out on lots of talented candidates. However, society has begun embracing diversity more willingly and started to accept that rigid hiring criteria can result in businesses being less diverse.

As a result, businesses are now starting to recognize that it may be more beneficial to focus on a candidate’s potential and ability to learn new skills, rather than their past experience. A willingness to consider removing some of the “must haves” from their hiring criteria is certainly one way that companies can increase their available talent pool and counter ongoing candidate shortages. LinkedIn has had success with this approach in a recent trial you can find written up here.

Inflating starting salaries and comp packages (21% of respondents): With businesses now having to compete for talent with other businesses from all over the world, it’s becoming increasingly common for them to have to offer inflated starting salaries and compensation packages to even be in the running to make hires. In some industries, this is now so commonplace that it’s hard to see this as part of the solution for a company, rather than simply what’s needed to be in with a shot of making a hire.

This of course can create tensions if new hires are being paid more than existing employees who are doing the same job. Furthermore, that’s not sustainable for any business wanting to keep its existing staff because it risks a domino effect of current employees leaving to get a pay rise at another company.

Accepting that timescales for making hires may need to be stretched (7% of respondents): I thought it fascinating that only 7% of you felt this was the compromise employers would be most willing to accept. Hiring timescales, it seems, just aren’t something that employers will countenance compromising over. The cost of a delayed hire is perceived as being worse than the cost of a bad hire seems to be the message here.

To counter this, I would argue that in many cases, taking a little longer to make a hire can actually result in finding a better candidate. After all, if businesses are willing to wait for the right person then they’re more likely to find someone who is truly committed to the role. They also give their recruitment partners more time to source candidates from a wider pool, which increases the chances of finding the ideal match.

If my poll of hundreds of recruiters is anything to go by, we should all be braced for the candidate shortages that have been hampering business growth to continue for the foreseeable future. For recruitment agencies able to deliver on client requirements, this spells a bumper period for fortunes to be made and new markets to be entered into. If you’re concerned you may not have the foundations in place to prosper, feel free to book in a time for a call and I’d be happy to talk through with you.

How to Engage More Effectively on LinkedIn: Tips for Recruitment Agency Owners...