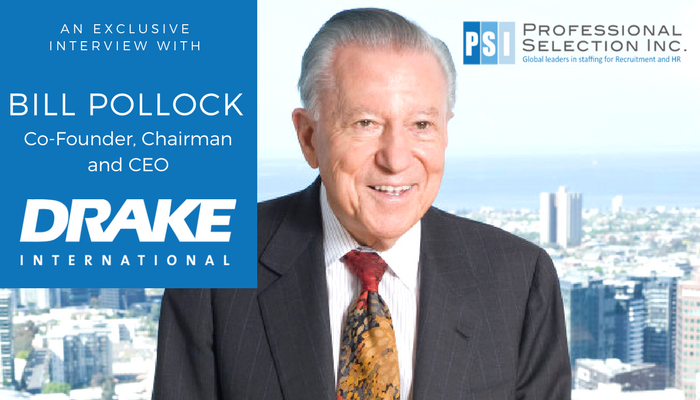 Suky: I just want to say what a pleasure it is to get to sit down with you and talk about your career and the business you’ve built. I know my peers and colleagues — pretty much everyone in our line of work — would love to learn more about the vision that went into building your firm into this industry leader.

I know you’re widely regarded as the founder of the Canadian recruitment industry: how did you get started?

Bill: I wasn’t the founder of the recruitment industry.

Theoretically, when we started in 1951, the only recruitment company in Canada was Canada Manpower — the government — and all of the employment agencies had been outlawed in the Second World War. And so, the laws were still in effect and no recruitment companies were legal in Canada until 1959. But there were a lot of black market guys operating outside the law in recruitment, but definitely in the shadows: if they’d been arrested, they’d have been in trouble.

Suky: If I look at it, that’s what we do as an industry: the bigger picture is that we increase companies’ productivity through human resources. Now fast-forward to 2017, you’ve got a lot of technology that’s also come into play. How did you originally envision that a recruitment agency would help your clients’ productivity?

Bill: So when we started as a company, we did not start as a temporary staffing company, or a recruitment business.

We started as a company that had an idea to improve productivity by picking up the peak office load work at client companies and having them outsourced into our premises, then we’d process the work on our premises. We hadn’t been going very long, probably less than a year, before clients said, “We can’t send the work out, can you send your people in?”

We didn’t keep note of the temporary help business at all. So it was just an experiment at that point, but doing temporary work on our premises, or the client’s premises, was the same. It’s all about balancing work versus workload.

Suky: So you printed a couple hundred timesheets. I’m intrigued: how fast did you run out of those timesheets and have to get some more printed? I’m an entrepreneur, I’ve been self-employed for around 20 years now. They might be small milestones, but getting to them and getting onto the next one is just one hell of a sense of achievement. Did you plan on just printing a couple hundred more?

Bill: Oh no, we stepped up more because it really caught on fast.

Suky: How did candidates perceive your business? People tend to want a permanent position, employed by the company whose premises they are going onto. You understood the productivity piece for the clients, but what about the candidates? Did they look at it and say, “why would we work through an agency?” Was temporary work a hard sell? How did your candidates take it?

Bill: It was really about women, who weren’t back in the workforce very much during those days. So it was really a case of finding married women who wanted some part-time work. And so that’s all we recruited for.

But just going back to the beginning, how did we get into the business of processing work on our premises? When I came out of university, I started selling business equipment. And, because at university I studied Actuarial Science, I was very mathematically-oriented. I tended to go to clients and say to them, “Look, let’s prove the benefit of investing in bookkeeping equipment. So we’ll measure the productivity of your manual workers and measure what it would cost you to invest in a bookkeeping machine.”

What surprised me is when I was doing the productivity measurements of the manual workers, I saw productivity was going up and down. And so I said, “Well, companies are overstaffed. They’re staffing for their peak period here. And when the workload falls off, all the staff are there so companies are paying full-time salaries for part-time jobs.”

So that’s what our business was founded on. Our slogan became: don’t pay a full-time salary for a part-time job.

Suky: I remember watching you on YouTube and hearing that slogan. It makes complete business sense. I’m really curious about how the Canadian market grew from those first steps, from a brand-new industry to an established market. When did people start noticing that “here’s a proven business idea with a real, viable market?” When did other agencies and competition start to emerge?

Bill: Well, when we got going in the temporary help business here, we finally woke up to the fact that it existed in the States. The employment agencies in the United States were not outlawed in the way they were in Canada. So employment agencies existed, including a few companies that started up temporary help companies down there — usually in the blue-collar area to help out unloading boxcars and things of that kind.

We were more focused on the white-collar area.

Suky: So it was an existing industry further South that hadn’t caught on in Canada. You were originally founded in Winnipeg and grew across Canada, and at some point you saw the international opportunity. Was there a driver behind that, or was it client business demands? What made you decide to go international?

Bill: Well, the driver was that we’d grown across Canada between 1951 and 1957 — 6 years — to all the principal cities. So the place to expand had to be the United States.

Suky: So the United States was number 2. Fast-forward today and you’ve got the UK which is, what, 30-something years old as a business? You’ve got Australia, New Zealand, the Philippines, South Africa. You’re a real global business. So at some stage not only did you go global in terms of staffing, but you also added so many value-adds in terms of business services. If I look at my business, all I do every day is talk to recruitment agencies — that’s the space I play in.

But if I look at the services that Drake International offers its clients, I’m hard-pressed to think of something you don’t offer your clients: staffing, assessments, outsourced HR, P3s, technology, and so on. I’ve seen you build this huge empire of value-adds. Is that something you originally planned? Was there a plan to add more services beyond temporary staffing, or was it in response to business demands as you saw them?

Bill: Well, it was more in response to business demands we saw. We grew up as a productivity improvement company. We thought that way. We didn’t think of ourselves as an HR company. And, as time went on, in order to assist clients to understand how to use this effectively, we got very much into work measurement. Measuring productivity, just the same way as I measured productivity to see whether it was justified to go into this business or not.

Those work measurement seminars could be extremely popular because, not only did we run them and get all kinds of attendance — we had no trouble filling them — but we ran them across the country in French and English. Clients would come to us — large clients, like General Electric and Ontario Hydro — and say, “Can you come and run it strictly for our own staff?” And we’d go in and run a seminar strictly for the managers in a particular company, which is an educational program.

So, that’s the reason why we grew up and we maintained a huge market share. Our market share in Canada remained about 60-70%, right up until about 1966, and then gradually it started to slide down because the Americans were moving in much more aggressively. They were moving in and cutting the margins and going to tender. We’d never gone to tender or anything like that — our clients just dealt with us. And that’s gradually when the whole thing shifted.

Suky: There are always those clients who are buying on price only. So the Americans come in and cut the margins and at some stage everyone walks away from business because it’s just not profitable anymore. But you still managed to keep the growth going, although it took a dip, but you managed to grow it in other areas. You mentioned that the term “temporary staffing” was forbidden.

Suky: That’s interesting. So for your internal hires at the time — the recruiters and managers and what have you — how easy was it for your team to understand the concept that we’re doing productivity, we’re not just putting in temporary employees: our purpose is to improve the client’s productivity?

Bill: Well, because of our work measurement seminars. First of all, I have to explain also that as we grew up, we couldn’t afford to hire people with a lot of experience. We were hiring mostly university students fresh out of university and training them. We trained them in our work measurement seminars, so 24, 25, 26 year-olds were the ones running these day-long seminars with 40, 50, 60 year-old managers. And those seminars were very, very effective. And of course, every temporary staffing person in the company also had to attend the seminar to learn all about it. So everyone was educated.

Suky: Right, so you made sure everyone was on the same page. So at some stage, I think 40-something years ago, you decided to move from Canada to Monaco. Do you still see Canada as home? Why the move?

Bill: Well, I love Canada. It’s no longer my home. I was forced out of the country by the very stupid Canadian tax laws. Pierre Trudeau brought in Capital Gains Tax, which is fine, every country should have that. He brought in a Capital Gains Tax that says we’ll measure your assets from the day you start — the Capital Gains Tax which was January 1, 1970; it eventually ended up being 1971 but that was the intent.

It only measured your improvement in your capital assets from that point forward. So if you’re a billionaire like the Buffets or something, and your stock value goes up 10% the following year, that’s the capital gain that you’re taxed on, if you sell them. Just if you sell them, and not for any other reason.

But they brought in this stupid law that said that, if it’s a private company, it’s retroactive on your goodwill since you started. It’s detrimental. That’s penalizing the startups instead of penalizing the big guys.

Suky: Absolutely, that’s penalizing the person that put their blood, sweat, tears and money on the line — and stayed up late trying to make a go of it.

Bill: Furthermore, they said if you leave the country and you have to reside anywhere else, you have deemed Capital Gains Tax the day you leave. So you haven’t even sold your company — sold anything — and you’re taxed retroactively to the day you started. So even if you want to go marry somebody in another country or something, you might not be able to do it because you have no money, no cash to to come up with to pay the taxes.

It didn’t make any sense at all. I spoke to numerous parliamentarians about this myself, trying to change it and it just proved that so many parliamentarians really didn’t know what they were talking about at all. They were just wiseguys.

We’re going to pause the interview here to keep things brief for you. Stay tuned for part two next week, as we continue our conversation with Bill Pollock, Co-Founder of Drake International.